Sign up Now. Difficult patient or difficult therapist? December 8 "Tuesdays with Mark"- Exercises in studying the patient and therapist. 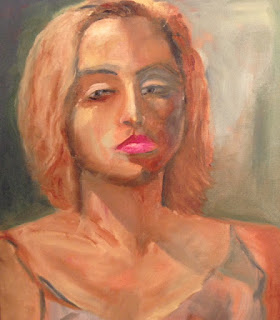 The image above does not mean that December 8 is an art show. One LinkedIn member was confused rightly so, but you will get an opportunity to see some of Mark's art.

Besides my individual practice I facilitate two groups and a third on the way. I was singing  ("singing" was a typo instead of "thinking" because I am using Mac dictation, but an interesting typo because I have been very thrilled about these groups) so yes I was emotionally singing yesterday. It was so refreshing to observe members taking risks to say what they were thinking even though feeling ashamed and anxious. Isn't it true we all ultimately want to  be free of the shackles of shame and fear? And in so many ways isn't that what we are trained not to be, namely authentic.  "You talk too much (or too little)"   "It's okay that you want to go to art school" (but you can tell it's really not), and on and on and on.
So in "Tuesday's with Mark" we learn what inhibits people from speaking freely, and how we can help them work through resistances. Or we might help them strengthen their resistance. One patient says she was told by her therapist that she was hiding and I said to her "Maybe you need to learn to hide more."
In my many years of experience I have found that it is the "difficult therapist" that gets into the way of treatment and not the so-called "difficult patient." This is helpful because therapists can then focus on themselves and what is creating stalemates in therapy rather than blaming the patient.
So I invite you come and talk about issues together. Part of the time will be discussing issues in treatment and learning helpful therapeutic interventions  (some interventions tend to be very destructive), and the other will be "free speak" where the task is to say everything as freely as possible and by doing so help our patients do the same.
We will learn about the most common mistake (s) that lead to premature termination in treatment; what to do and not to do in the first interviews to build a relationship; why following the contact function is the most important guideline in treatment; the best way to set a fee- hint, it is not a good way to do it on the phone unless necessary; charging for missed sessions, or not; and many more. Some papers will be handed out to illustrate essential points covered over the semester.  Reading them though is not required.
Act now. I have a few people signed up and there is limited space.

After discontinuing Prozac several patients have observed feeling more energetic and ambitious.  It made me think of a footnote from the Prozac best seller:

At the end of Listening to Prozac (1993), the book that catapulted Prozac into 35 million customers, there is a footnote that questions  "...whether antidepressants . . .promote tumor growth:" ... "The study raised questions as to whether antidepressants might be dangerous to patients who already have cancer or who have some exposure to carcinogens."

My mother, dead now, was one of the first women to get sober through AA in 1949. That saved my life. AA has its problems as far as the rules and demands made on it's members. But it certainly saved many lives. Back in the day it was just "come to meetings". At age 8 I would go with my mother when she brought a bottle to a member's home and then she would bring me to the AA clubhouse where "Pop" would make dinner- for free to everyone- contributions accepted. Some of my patients thrive in AA and other 12 step programs, and others need a different approach. Hopefully our skills help our clients speak about their ambivalence about drug and alcohol use, without imposing our agenda as to which is the "best" way for them to recover.
Posted by Mark at 3:15 PM No comments:

"It is only with the heart that one sees rightly, what is essential is invisible to the eye." In The Little Prince the Prince tames the fox. He meets the fox slowly and always at an appointed time. The fox becomes special to the Prince, and through these encounters he realizes that the rose, rather than being just one of thousands, is a very special rose.

In therapy each participant in his or her  own way works out their difficulty in perceiving the other until a truer perception is achieved. Achieving intimacy is being known and recognized on an emotional rather than a cognitive level although both are important. Therapist and patient have many feelings toward each other and at times the therapist will express his or her feelings at the right time. There is the real and the transference relationship and both need to be understood.
Transference for the most part dissolves in a successful treatment.

In the beginning the Little Prince was disappointed because adults could not understand what he was trying to tell them so he gave up his intentions to become a painter. He wanted to feel understood. And at the end he did became special. And also at the end there is always some weeping because as the fox said, one has to risk weeping if one allows oneself to be tamed.

From the The Little Prince


“To me, you are still nothing more than a little boy who is just like a hundred thousand other little boys. And I have no need of you. And you, on your part, have no need of me. To you, I am nothing more than a fox like a hundred thousand other foxes. But if you tame me, then we shall need each other. To me, you will be unique in all the world. To you, I shall be unique in all the world…”


“One only understands the things that one tames,” said the fox. “Men have no more time to understand anything. They buy things all ready made at the shops. But there is no shop anywhere where one can buy friendship, and so

In therapy a patient feels recognized because of the special attention that he or she receives. It is attention without judgment.  Therapy is a special place where the person can talk about who they are, what they want and find the freedom to be genuine. Being genuine builds self acceptance and a confidence that no one can take away.

I love when people blush- a sweet sign of being human and imperfect.
Posted by Mark at 4:47 AM No comments:

Narcissistic vulnerability predisposes people to drug and alcohol use. How people are raised predisposes them to narcissistic injury. What can we do?
Posted by Mark at 5:33 AM No comments: